I use a bunch of IOS ham radio apps on my iPhone. The list of apps below are those I use most frequently. The links will take you to the Apple pages that better describes their features. Perhaps some of these apps may be useful to you.

Some of the apps have overlapping tools. DXToolBox and HamLog have a lot of similarites. HamLog beats DXToolBox for a bunch of reasons in my opinion.

HamAntCalc: A $1.69 app that calculates the length of dipoles, inverted vee’s, verticals and more.

ISS Spottter: A free app (with optional in app purchases) that makes it easy to locate the International Space Station (ISS). You can also forecast future low passes for your area, set an alarm of the pass you want to view.

Resistor Code Calculator: A free app that’s a big help for these tired old eyes. The app calculates resistor colors and translates them into corresponding values. A useful app for anyone building kits or test circuits.

Ham Morse: A $4.99 app and worth every penny! Ham Morse is a comprehensive learning tool with different methods sending code, It will definitely help to improve your skill level. As a CW op for over 30 years, I fall back to it for a quick ‘head tune up’ from time to time.

Callbook: A free app which is handy for looking up detailed info about the call while working field operations such as Parks on the Air.

Hamclock: A 99 cents app which is a handy quick reference tool for field ops. Hamclock displays local and UTC time as well as your current grid square info.

HamLog: A 99 cents app that has an amazing array of ham radio tools for field operations. Hamlog’s features go way beyond simple logging. Visit N3WS’s Pignology site and check out his complete line of hardware interfaces and other ham radio software.

Which ham radio apps do you use on IOS or Android? 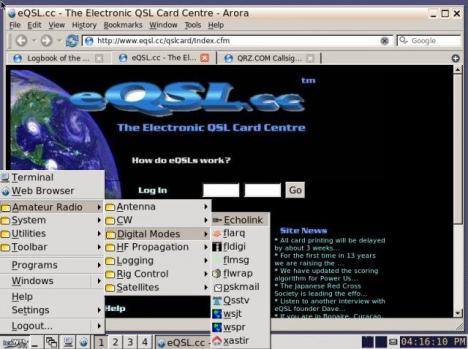 Since I have plenty of time on my hands now, I have taken up experimenting with various LINUX distros again using the very cool Oracle Virtual Box software. If you are not familiar with this stuff, simply put it’s like running an operating system within an operating system. In this case, I have installed Oracle’s VIRTUAL BOX software under UBUNTU.

Once Virtual Box is up you can install any O/S in it (that I have run across to date). That is, as long as you have enough hardware on your system to run it effectively. I recently found out about KB1OIQ – Andy’s Ham Radio Linux CD. So, naturally I had to give it a go.  The installation under Virtual BOX was typical and ran flawlessly unlike some distros (such as Fedora release 18). Andy explains the basic hardware requirements for installation on his SourceForge page  As the case with other distros, you can create a LIVE CD and run his software that way without disturbing the current OS located on your system.

In summary, if you like to experiment with different distros of LINUX you may want to try out Andy’s software. As long as you know how to burn a .iso file to CD then the LIVE CD is the least invasive way to give it a go.

Please comment if you decide to try out Andy’s distro and more specifically what you liked about it!

Hey, there is a very popular magazine among the open source crowd wich has dedicated its Janualy 2010 issue to amateur radio software. When you think about it, it does seem a bit strange that the majority of software for amateurs is written for the plug and play folks.

I know, I can hear you say that the answer to that riddle is simple. Windows is the most popular (widely used at least) operating system in the world. Writing software for Windows gets you the most exposure and it’s easy. Unlike LINUX , you don’t have to be concerned with drivers and there are no library dependencies to struggle with.

While Windows is the most convenient to install with its Wizards and Cartoons (graphics), doesn’t it kind of fly in the face of the roots of our hobby?

Where is the challenge in plug and pray (play) guys? Does the functionality of “plug and play” have some hidden symbiotic relationship with the term appliance operator? Just joking guys.

Wait! I am not suggesting that time should be dedicated (wasted) rewriting complex software for the hell of it. But it sure would be nice to see more ham radio software available (along with the source code) for the open source platform.

As the article goes on to say, amateur radio really was the “first open source project”. I’d agree with that as the author, David A. Lane KG4GIY explains it.

In any event, if you have an interest in amateur radio software and the open source operating environment, take a look at the article. There are links to other LINUX resources on the Linux Journal site. Perhaps you will pick up a copy of the January 2010 issue of Linux Journal.

David A Lane KG4GIY has been licensed as an Amateur Radio operator since 2000 and has been working with Linux since 1995. David steps in as Linux Journal’s guest editor for this special issue. During the day, he is an Infrastructure Architect. During an emergency, he is an Emergency Coordinator for Prince William County ARES. And on weekends, he makes pasta!

What is your opinion of open source software and the LINUX operating system?

Do you use LINUX in your shack?

If so, what applications do you run? 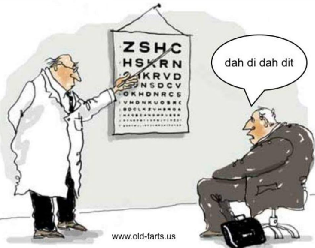